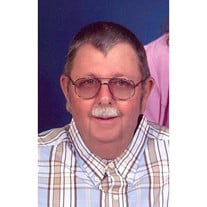 William Belmont "Buckie" Moore III, 75, of Henderson, passed away Tuesday, November 22, 2016, at the Emogene Dolin Jones Hospice House in Huntington, WV He was born November 17, 1941, in Chelyan, WV, a son of the late William Belmont Moore II and Irene Dusto (Mucklow) Moore. Buckie served his country in the United States Navy and retired from American Electric Power with 30 years service. He was a member of the Navy Reserve and a council member for the Town of Henderson. He is survived by his wife, Shelia L. (Mitchell) Moore of Henderson; three sons, David (Zoann) Moore of Point Pleasant, William Brad Moore of Point Pleasant and Brandon M. Moore of Henderson; one daughter, Kimberly Moore of Point Pleasant; a stepdaughter, Stacy (Chuck) Litchfield of Henderson; and five grandchildren, Amelia, Jared, Violet, Kelly and Justin. He is also survived by one brother, Jon (Jane) Moore of Ravenswood, WV; and two special aunts, Sarah "Sally" Hanna of Florida and Alma Petry of Texas. A funeral service will be 11 a.m. Saturday, November 26, 2016, at Wilcoxen Funeral Home in Point Pleasant, with Rev. Doug Mitchell officiating. Burial will follow at Montgomery Memorial Park, London, WV. Visitation will be from 6-8 p.m. Friday at the funeral home. Condolences may be expressed to the family and memories may be shared by visiting www.wilcoxenfuneralhome.com.

The family of William "Buckie" Moore III created this Life Tributes page to make it easy to share your memories.