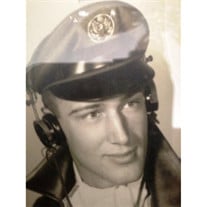 William E. "Bill" Roberts Sr., 85, of San Antonio, FL, formerly of Point Pleasant, passed away Wednesday, June 19, 2019, at home. He was born July 4, 1933, in Bedford Township, Meigs County, OH, a son of the late William Grant Roberts and Alma Elizabeth (Clark) Roberts. In addition to his parents, he was preceded in death by a brother, Bruce "Clark" Roberts. Bill was a member of the Church of Christ.  His early educational years were spent in Point Pleasant, graduating with Point Pleasant High School Class of 1952, and then going to Marshall University on a football scholarship.  He later received his B.A. degree in Sociology at the University of Tampa and his M.A. degree in Guidance and Counseling at the University of South Florida.  He served his country honorably in the United States Air Force for 24 years.  During that time he lived in Japan, Philippines, Turkey, Africa and Vietnam.  His interests were in HAM radio operating, which he did for 43 years, and running marathons where he medaled in the 2nd British/American Marathon and Brandon Marathon. But most of all, he enjoyed his vocation of elementary school counselor.  In 1996, he was chosen Elementary Counselor of the Year for Hillsborough County, FL and on June 4, 1999 after 20 years of counseling he retired. He is survived by his wife, Frances (Toney) Roberts, whom he married December 15, 1952; a daughter, Kim E. Roberts of Frederick, MD; and one son, William E. Roberts Jr. of Tampa, FL. A funeral service will be noon Wednesday, July 3, 2019, at Wilcoxen Funeral Home in Point Pleasant, with Chaplain Victor J. Toney officiating.  Burial will follow at Beech Grove Cemetery in Pomeroy, Ohio.  Military graveside rites will be given by the Wright-Patterson AFB Honor Guard.  The family will receive friends one hour prior to the funeral service Wednesday, July 3, at the funeral home. In lieu of flowers, the family request that memorial contributions be made in Bill's memory to: JCSE Veterans Association, Attn. Scholarship Fund Committee, P. O. Box 6032, MacDill AFB, FL 33608 or a charity of your choice. Condolences may be expressed to the family and memories may be shared by visiting www.wilcoxenfuneralhome.com.

The family of William Eldon Roberts Sr. created this Life Tributes page to make it easy to share your memories.