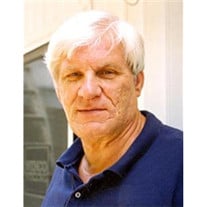 Dana Theodore Brown, 82, of Point Pleasant, died Friday, May 29, 2015 at home. He was born April 8, 1933, in Morgantown, WV, a son of the late Dana Theodore Brown and Ruth Elizabeth (Rohr) Brown. Dana was a member of Trinity United Methodist Church in Point Pleasant. He was a Point Pleasant High School graduate Class of 1952, attended Marshall University 1952-1953, KonKol Design School and Electro-Mechanical School in Orange, California for two years then completing his education at North American Aircraft Design School in Long Beach, California. He served his country honorably in the United States Marine Corps, was chief paymaster in the Washington DC area. Dana was a retired Aerospace Designer with North American-Rockwell International, during his career he helped with the design of the Apollo Saturn S-5 Engine Gimbles and Mounts and later with the redesign of the Apollo Spacecraft, B-1 Bomber and the original space shuttle.. He had also served as councilman-at-large for the City of Point Pleasant and was a member of the Point Pleasant Gun Club. In addition to his parents, he was preceded in death by two brothers, Charles Jackson Brown and James Franklin Brown. He is survived by his wife, Susan (McCutcheon) Raike Brown of Point Pleasant; a daughter, Tammy (David) Morrison of Point Pleasant; step children, Kathryn Raike (Brian) Panuline of Virginia Beach, VA, David Raike of Point Pleasant and Andy Raike of Point Pleasant; six grandchildren; and two sisters, Wanda (Bill) Russell of Gallipolis, OH and Linda Ealey of Point Pleasant. A funeral service will be 11 a.m., Monday, June 1, 2015 at Wilcoxen Funeral Home in Point Pleasant, with Pastor Jim Kelly officiating. Burial will follow at Kirkland Memorial Gardens in Point Pleasant, with military rites given by West Virginia Marine Corps and American Legion Post No. 23 of Point Pleasant. Visitation will be from 6-8 p.m., Sunday at the funeral home. Condolences may be expressed to the family and memories may be shared by visiting www.wilcoxenfuneralhome.com.

Dana Theodore Brown, 82, of Point Pleasant, died Friday, May 29, 2015 at home. He was born April 8, 1933, in Morgantown, WV, a son of the late Dana Theodore Brown and Ruth Elizabeth (Rohr) Brown. Dana was a member of Trinity United Methodist... View Obituary & Service Information

The family of Dana Theodore Brown created this Life Tributes page to make it easy to share your memories.

Send flowers to the Brown family.