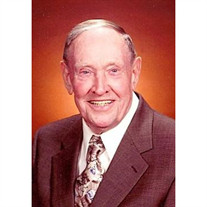 Donald L. Ward, 84, of Point Pleasant, passed away Monday, November 30, 2015, at home. He was born June 17, 1931, in Huntington, WV, a son of the late George Washington Ward and Hester Ann (McKenzie) Ward. Don graduated from Vinson High School, Class of 1950, and was a proud Vinson Tiger who played football for Coach Don Malcolm, winning the state championship in 1948. He served his country honorably during the Korean War in the U.S. Air Force. Don retired from Constellium (Kaiser Aluminum) as a crane operator. He was a member of Bellemead United Methodist Church, American Legion Post 23 and Loyal Order of Moose all of Point Pleasant. In addition to his parents, he was preceded in death by his wife, Mary Frances (Fannin) Ward; one son, Michael Stephen Ward; a grandson, Donald Paul Ward; three brothers, Charles Ward, Clifford Ward and George Ward; and three sisters, Frances Finley, Gertrude Payne, and Fay Turner. He is survived by a daughter and son-in-law, Leslie Ann and Matthew Martin of Proctorville, OH; one son and daughter-in-law, Gregory E. and Cheryl Ward of Milton, WV; grandchildren, Jamie Ward of Proctorville, Lianna Ward of Nashville, TN, Scott Ward of Proctorville, Meili Martin of Proctorville, and Minda Martin of Proctorville. Also surviving are one sister, Verna Irene (Gary) Keller of Barboursville, WV; a special niece, Patty Blevins of Huntington; and special friends John Thompson and Tom Evans; and a host of nieces and nephews. The family would like to give a special thanks to the men of Bellemead United Methodist Church for their help. A funeral service will be at 2 p.m. Thursday, December 3, 2015, at Wilcoxen Funeral Home in Point Pleasant, with Rev. Chip Bennett officiating. Burial will follow at Kirkland Memorial Gardens in Point Pleasant. The family will receive friends two hours prior to the funeral service Thursday at the funeral home. Don was a wonderful father and grandfather. He will be greatly missed. Condolences may be expressed to the family and memories may be shared by visiting www.wilcoxenfuneralhome.com.

The family of Donald Lee Ward created this Life Tributes page to make it easy to share your memories.

Send flowers to the Ward family.