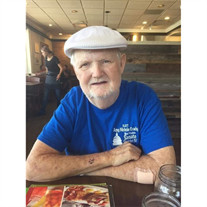 Coach Gene Austin "Groundhog" Moore, 70, of Point Pleasant, WV, passed away Wednesday, December 25, 2019, at home surrounded by family. He was born October 3, 1949, in Point Pleasant, a son of the late Capt. Goffrey Dale Moore and Louise Immogene (Vaughan) Moore. Gene was a member of Sandhill Church of Christ in Point Pleasant.  He was a graduate of Point Pleasant High School Class of 1967, Harding University Class of 1972 and received his master's degree from Marshall University. Gene was a retired school teacher from Mason County Schools with 38 years of service. In addition to his parents, he was preceded in death by two brothers, Vaughan and Lyle Moore. He is survived by two daughters, Amy Moore-Elam of Point Pleasant and Kristy Robinson (Craig) of Point Pleasant; a son, Austin Moore (Kim) of Columbus, OH; a brother, Dale Moore of West Columbia; a sister, Carolyn Sayre of Point Pleasant; five grandchildren, Stephen Prince, Dylan Prince, Asher Robinson, Jairus Robinson, and Clay Elam; mother of his children, June Kessinger of New Haven; two sisters-in-law, Linda Moore and Cheryl Moore; several nieces and a nephew; and a host of former students, athletes and friends. A funeral service will be held at 2 p.m. Sunday, December 29, 2019, at Henderson Church of Christ in Henderson, with Minister Dan Kessinger officiating.  Burial will be at the Austin-Hope-McLeod Cemetery in Gallipolis Ferry, WV.  Visitation will be from 6-8 p.m. Saturday at the Wilcoxen Funeral Home. In lieu of flowers, contributions may be made "In Memory of Gene Austin Moore" to: WV School of Preaching, 1 Willard Ave, Moundsville, WV 26041. Condolences may be expressed to the family and memories may be shared by visiting www.wilcoxenfuneralhome.com.

The family of Gene Austin Moore created this Life Tributes page to make it easy to share your memories.

Send flowers to the Moore family.