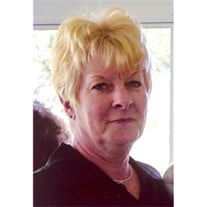 Glenna F. Williamson, 70, of Southside, passed away Thursday, July 28, 2016, at home surrounded by her family. She was born June 10, 1946, in Pliny, WV, a daughter of the late Rex Davis Adams and Mary Maxine (Chapman) Adams. Glenna attended the Siloam Baptist Church in Pliny. She was a graduate of Point Pleasant High School Class of 1964, was a homemaker and enjoyed farming. In addition to her parents, she was preceded in death by a daughter, Terry Lynn Williamson; one sister, Geraldine Adams Putney; brother, Robert Eugene Adams; brother-in-law, Jim Newton; and father-in-law and mother-in-law, Torres A. and Maxine G. Williamson. Glenna is survived by her husband, Wayne Williamson of Southside; a daughter and son-in-law, Tamara "Tammy" and Patrick Young of Racine, OH; three grandchildren, Torrie Lynn Epling, Trinity Elizabeth Epling, and Tanner Miles Epling of Point Pleasant; and two step-grandchildren, Justin Young of Columbus, OH and Chris Young of Racine. She is also survived by two sisters, Jeannie Newton of Logan, OH and Brenda (Jim) Morgan of Pliny; several nieces and nephews; special neighbors and friends; brothers-in-law and sisters-in-law; and her loving canine companion Sadie. A funeral service will be 2 p.m. Sunday, July 31, 2016, at Wilcoxen Funeral Home in Point Pleasant, with Rev. Fred McCallister and Pastor Jonathan Pinson officiating. Burial will follow at Harmony Cemetery in Southside. Visitation will be from 6-8 p.m. Saturday at the funeral home. In lieu of flowers for those considering an expression of sympathy, donations may be made to: Pleasant Valley Hospice, 1011 Viand Street, Point Pleasant, WV 25550. Condolences may be expressed to the family and memories may be shared by visiting www.wilcoxenfuneralhome.com.

The family of Glenna F. Williamson created this Life Tributes page to make it easy to share your memories.

Send flowers to the Williamson family.