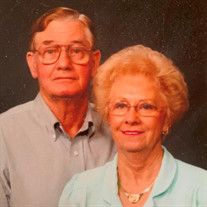 Arthur Odell Powers, 82, of Glenwood, gained his wings on Sunday, August 22, 2021, at Paramount Senior Living Center in Ona, WV. He was born September 2, 1938, in Glenwood, WV, to the late Claude Franklin Powers and Ida Frances (Deal) Powers. In addition to his parents, he was preceded in death by brothers, Eddie Rex Powers, Claude Wesley Powers, Charles Dennis Powers and special little dog Precious. He is survived by his wife of 64 years, Edith (Sturgeon) Powers; one son, Randy (Judy) Powers; granddaughter, Courtney (Brian) Powers-Brumfield and two great-grandchildren, Justis (Lindsey) Powers-Cupp and Jaisten Brumfield all of Glenwood; one sister, Linda Sue (Brian) Adkins of Gallipolis Ferry, WV; one brother, Lloyd Franklin (Vonda) Powers of Apple Grove, WV, and special friend, Eugene Plumley of Glenwood. Arthur and his wife were business owners for over 40 years, operating several different businesses throughout Gallia, Mason and Cabell Counties. He enjoyed spending time at the Moose Lodge in Point Pleasant and boating down the Ohio River. He was loved by many and will be greatly missed. A graveside service and burial will be held at 3 p.m. Wednesday, August 25, 2021, at the Apple Grove Memorial Gardens in Apple Grove, with Pastor Ronald Long officiating. Services are under the direction of the Wilcoxen Funeral Home in Point Pleasant. Condolences may be expressed to the family and memories may be shared by visiting www.wilcoxenfuneralhome.com.

The family of Arthur Odell Powers created this Life Tributes page to make it easy to share your memories.

Arthur Odell Powers, 82, of Glenwood, gained his wings on Sunday,...

Send flowers to the Powers family.