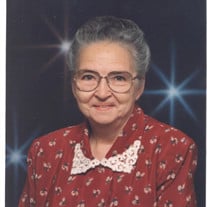 Betty Jo Rowley Walter, 86, went home to be with the Lord on October 9, 2021. She was born Betty Jo Smith to the parents of Lewis and Cynthia Smith on November 30, 1934, in Ashland, KY. Betty was saved when she was a teenager and lived for God throughout her life. She attended God's Bible School in Cincinnati, OH, where she met Maurice James "Jim" Rowley. They were married on June 19, 1955. Jim and Betty had 12 children. After Jim became an ordained minister, they pastored several churches in Ohio, Kentucky and Tennessee. Betty was a servant all her life. She loved to help others. Over the years she was Sunday school teacher as well as taught 3rd grade math at Bowers Elementary in Harriman, TN. She also taught English at the Friendsville Christian School in Friendsville, TN. While living in Covington, KY, she worked for the Internal Revenue Service. She had several jobs but none as important as being a wife and a mother and later a loving grandmother. After Jim's passing in 2002, she moved to Maryville to be near some of her children. She later met and married Rev. John Walter and moved to Pennsylvania. Betty is preceded in death by her parents, Lewis and Cynthia Smith; brothers, Dewey, Jim, Clyde and Robert Smith; sisters, Dorothy Johnson and Bertha Mae Shepherd; her husband of 47 years, Rev. Jim Rowley; two sons, Kenneth and Roger Rowley; a grandchild, Michael Goodpaster; and a stepdaughter, Treva Walter. She is survived by her husband, Rev. John Walter; her children, Karen (Tim) Double of Point Pleasant, John (Sherry) Rowley of Kingston, TN, Terry Rowley of Riverside, CA, Ruth (Gary) Chong of Honolulu, HI, Anita (Dave) Hazelwood of Bartlesville, OK, Amy (Steve) Kunselman of Hillsdale, PA, Rhonda (Dan) Quesenberry of Jackson Center, PA, Chris (Kathy) Rowley of Knoxville, TN, Debbie (Dan) Peachy of Bartlesville, OK, and Steve (Christy) Rowley of Knoxville, TN. She is also survived by a brother, Oscar Ray Smith of Grayson, KY; sisters, Elizabeth Manns of IN, Patricia (Dewey) King of NC and Rebecca Moore of Rush, KY; 20 grandchildren, 17 great-grandchildren; and numerous nieces and nephews. She is also survived by stepchildren, Linda (Paul) Clough of PA, John Walter Jr. of NY, David (Joyce) Walter of Millmont, PA, Julie (Lamar) Moyer of Andreas, PA, and Kathleen (James) Hallenbeck of PA; and 20 step-grandchildren. A funeral service will be held at 11 a.m. Thursday, October 14, 2021, at the Wilcoxen Funeral Home in Point Pleasant, West Virginia, with Rev. David Walter officiating. Burial will follow at the Forest Hills Cemetery in Letart. Visitation will be Wednesday from 6-8 p.m. at the funeral home. Condolences may be expressed to the family and memories may be shared by visiting www.wilcoxenfuneralhome.com.

Betty Jo Rowley Walter, 86, went home to be with the Lord on October 9, 2021. She was born Betty Jo Smith to the parents of Lewis and Cynthia Smith on November 30, 1934, in Ashland, KY. Betty was saved when she was a teenager and lived for... View Obituary & Service Information

The family of Betty Jo Walter created this Life Tributes page to make it easy to share your memories.

Send flowers to the Walter family.