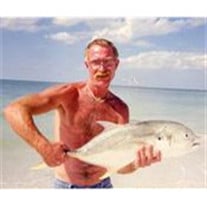 Brian C. Ebert, 56, of Rio Grande, Ohio, died Thursday, January 31, 2013 at home after a long illness. He was born September 30, 1956, in Point Pleasant, WV, a son of the late Clarence Ray Ebert and Carol Jean (Dabney) Ebert Powell. Brian attended Jordan Baptist Church at Gallipolis Ferry, and was an avid outdoorsman, sharing his love of hunting with his son and oldest granddaughter. In addition to his parents, he was preceded in death by an infant daughter, Rena Ebert; and stepfather, Junior Powell. Brian is survived by one daughter, Brandi (Ben) Gard of Apple Grove, WV; a son, Israel "Buck" Ebert of Rio Grande; three granddaughters who were the love of his life, Layne, Skylar, and Jyllian; his loving companion, Shelly Hager of Rio Grande; one brother, Michael Ebert of Point Pleasant; a special cousin, Donna Backus; and special friend, Linda Lear. A funeral service will be held at 11 a.m., Monday, February 4, 2013, at Wilcoxen Funeral Home in Point Pleasant with Pastor Ron E. Swiney officiating. Burial will follow in Apple Grove Memorial Gardens at Apple Grove. Visitation will be from 6-8 p.m., Sunday at the funeral home. Online condolences may be made at www.wilcoxenfuneralhome.com.

The family of Brian Ebert created this Life Tributes page to make it easy to share your memories.

Send flowers to the Ebert family.