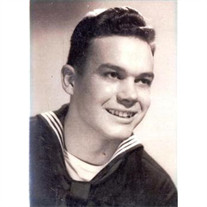 George Leonard Grimm, 88, of Letart, died Monday, June 27, 2016, at Pleasant Valley Hospital. He was born April 5, 1928, in Letart, a son of the late George Alton Grimm and Virginia Dare (Roush) Grimm. George graduated from East Liverpool High School and from 1949 to 1953 served his country honorably in the United States Navy on the USS Bergall SS320 submarine. He attended the Oldtown Board Baptist Church and was a member of the Letart Community Center advisory board. George started his working career at the Kyger Creek Power Plant in Cheshire, Ohio and later transferred to the Mountaineer Plant in New Haven, where he retired in 1990 as a maintenance supervisor. In addition to his parents, he was preceded in death by two sisters, Leoda Folger and Becky Talkington; three brothers, William W. Grimm Sr., Thomas Grimm and infant Alton D. Grimm, and brother-in-law, Delton Sayre. He is survived by his wife of 62 years, Arlene L. (Sayre) Grimm of Letart; four daughters, Charlotte Gilley and Terry Tyree of Point Pleasant, Marilyn Kearns and Marc of Letart, Lesa Quickel and Bill of Pomeroy, OH, and Mary Grimm and John Byer of Baltimore, OH; two grandchildren, Kris (Sheri) Gilley and Jason (Tonna) Gilley; and five great-grandchildren, Morgan, Brooks, Blake, Audrey and McKynlee. Also surviving are one brother, Homer (Esther) Grimm of Illinois; brothers-in-law, Dean (Barb) Talkington of East Liverpool, OH and Tommy (Louease) Sayre; sister-in-law, Geri Hill; and several nieces and nephews. A funeral service will be 1 p.m. Wednesday, June 29, 2016, at Wilcoxen Funeral Home in Point Pleasant, with Pastor Brian Ross officiating. Burial will follow at Letart Evergreen Cemetery in Letart. Military graveside rites will be given by the Navy Honor Guard and American Legion Post 23 of Point Pleasant. The family will receive friends two hours prior to the funeral service Wednesday at the funeral home. In lieu of flowers, donations should be made to: Mona Powell, 1317 Radical Lane, Letart, WV 25253 for the Veterans Memorial Project at the cemetery. Condolences may be expressed to the family and memories may be shared by visiting www.wilcoxenfuneralhome.com.

The family of George Leonard Grimm created this Life Tributes page to make it easy to share your memories.

Send flowers to the Grimm family.