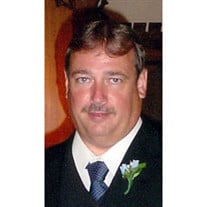 Larry Dale Smith, 58, of Gallipolis, Ohio, died Tuesday, January 17, 2012, at Riverside Methodist Hospital in Columbus, Ohio. He was born April 17, 1953 in Point Pleasant, a son of the late Raymond Dale Smith and Mary Elizabeth (Maynard) Smith of Gallipolis Ferry, WV. Larry was a member of Krebs Chapel Church, and a heavy equipment operator for American Electric Power. In addition to his father, he was preceded in death by a brother, Raymond Gary Smith. He is survived by, one son, Scott Smith and finacee' Brandi Kinder of Hurricane, WV; a daughter and son-in-law, Taleah and John Taylor of Newark, OH; mother, Mary E. Smith; four grandchildren, Kaden, Kyler, Jordan, and Kyleigh; two sisters, Darlene Canterbury of Point Pleasant, and Linda Scarberry of Proctorville, OH; a special friend, Dwayne Caldwell of Gallipolis; several nieces and nephews; and his pet, Casper. A funeral service will be held at 11 a.m., Saturday, January 21, 2012 at the Wilcoxen Funeral Home in Point Pleasant with Rev. Bobby Woods officiating. Burial will follow at the Beale Chapel Cemetery in Apple Grove. Visitation will be from 6-8 p.m., Friday at the funeral home. Online condolences may be made at www.wilcoxenfuneralhome.com.

The family of Larry Dale Smith created this Life Tributes page to make it easy to share your memories.

Send flowers to the Smith family.