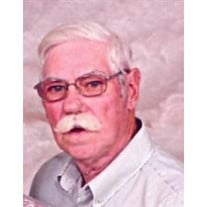 Norman George Williams, 77, of Leon, WV, died Sunday, April 7, 2013, at Pleasant Valley Hospital in Point Pleasant. He was born March 20, 1936, at Williams Mountain, Boone County, WV, a son of the late George Williams and Hattie Mae (Brown) Williams. Norman was a retired machinist from Timken Roller Bearing Company of Columbus, Ohio with 31 years service, and had served his country in the United States Army from 1959-1964. While living in Columbus he was a member of Masonic Lodge No. 340 of Reynoldsburg, OH. He was past treasurer and trustee of Bethel Church in Leon, WV, was a driver for the Mt. Flower Rescue Team, and attended Gospel Lighthouse Church on Chestnut Ridge, Leon. In addition to his parents, he was preceded in death by a sister, Arlene Skeen; three brothers, Chester, Blain, and Burl Williams; and father-in-law and mother-in-law, Roy and Erma Matheny. Norman is survived by his wife of 49 years, Elva F. (Matheny) Williams of Leon; son and daughter-in-law, Robert and Lori Williams of Hilliard, OH; daughter and son-in-law, Joyce and Dean Truman of Hilliard; and devoted son, Harvey Williams of Columbus, OH. Also surviving are grandchildren, Timothy Cox, Nicole Truman, Sarah Williams and Brook Williams; one brother, Wayne Williams, and one sister, Avanell Rundels both of Columbus; brothers-in-law and sisters-in-law; numerous nieces and nephews; and his constant companion Grace the dog. A funeral service will be held at 1 p.m., Wednesday, April 10, 2013 at Wilcoxen Funeral Home in Point Pleasant with Ministers Robert Williams and Johnny Hayman officiating. Burial will follow in the Bethel Cemetery at Leon where military graveside rites will be given by West Virginia Army Honor Guard and American Legion Post No. 23 of Point Pleasant. Visitation will be from 12 to 1 p.m. Wednesday at the funeral home. Online condolences may be made at www.wilcoxenfuneralhome.com.

The family of Norman George Williams created this Life Tributes page to make it easy to share your memories.

Send flowers to the Williams family.