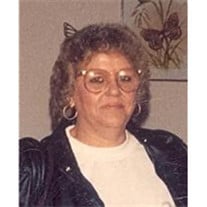 Pearl V. Cole, 72, of Point Pleasant, died Saturday, October 6, 2012 at Cabell Huntington Hospital. She was born March 12, 1940 in Point Pleasant, WV, the daughter of the late Ronald Woomer and Mildred (Darst) Woomer. She was a member of the... View Obituary & Service Information

The family of Pearl V. Cole created this Life Tributes page to make it easy to share your memories.

Send flowers to the Cole family.