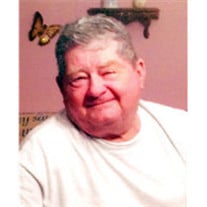 Timothy W. Saunders, 73, of Apple Grove, died Thursday, June 7, 2012, at St. Mary's Medical Center in Huntington, WV. He was born August 2, 1938 in Huntington, WV, a son of the late Malcolm Franklin Saunders and Mary Eloise (Winn) Saunders. Timmy was a member of Barton Chapel Church where he served as trustee, was a volunteer for the Valley Fire Department, and attended Hannan High School. He was a farmer, and had also worked for O'Kan Harbor in Gallipolis, Ohio and drove milk truck for Watterson's Trucking. In addition to his parents, he was preceded in death by a brother-in-law, John Carter. He is survived by his wife, Elizabeth G. (Long) Saunders of Apple Grove; daughter and son-in-law, Rachel Hope and Scott Martin of Apple Grove; one son, Timothy Stephen Saunders of Washington, D.C.; a grandson, Alexander Martin of Apple Grove; one brother, Samuel (Isabelle) Saunders of Point Pleasant; a sister, Emily Ann Carter of Marysville, Ohio; and several nieces, nephews, and a host of family and friends. A funeral service will be held at 2 p.m., Sunday, June 10, 2012 at Barton Chapel Church in Apple Grove, with Pastor Ronald Long officiating. Burial will follow in the Barton Chapel Cemetery. Visitation will be Saturday from 6-8 p.m. at the Wilcoxen Funeral Home in Point Pleasant and one hour prior to the service at the church Sunday. Online condolences may be made at www.wilcoxenfuneralhome.com.

The family of Timothy Wynn Saunders created this Life Tributes page to make it easy to share your memories.

Send flowers to the Saunders family.