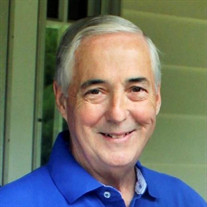 William Henry Wallace III, of Point Pleasant and Winnsboro, SC, went to be with his savior, Jesus Christ Monday, February 15, 2021, with his wife of 55 years and children at his bedside. Bill was born June 11, 1943, to Harriet Louise (Higgins)... View Obituary & Service Information

The family of William Henry Wallace III created this Life Tributes page to make it easy to share your memories.

Send flowers to the Wallace family.