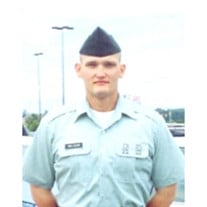 Robert Anderson Wilson, 41, of Point Pleasant passed away Monday, July 27, 2020. He was born December 20, 1978, the son of John Anderson Wilson and Catherine Elizabeth (Darst) Wilson of Point Pleasant. He was preceded in death by maternal grandparents, Robert "Bob" Darst and Viola Elizabeth (Kayser) Darst and paternal grandparents, John "Andy" Wilson and Martha Carolyn (Childs) Wilson and a sister, Ginny Catherine Wilson. He is survived by daughters, Jocelyn and Cassidy Wilson and sons, Dawson, Wyatt and Brant Wilson all of Point Pleasant; brother and sister-in-law, Eli and Jessica Wilson of Gallipolis Ferry; and a nephew, Levon Wilson of Gallipolis Ferry.  Also surviving are aunts and uncles, Gretchen and Tom Baarman of Myrtle Beach, SC, Susan Murphy of Point Pleasant, Donna and Mervin Baumgardner of Lehigh Acres, FL and Robert and Linda Darst of Winfield; as well as several cousins and many friends. Rob was a graduate of Point Pleasant High School Class of 1997, where he was active in football and track and field teams.  He also attended Marshall University. He enlisted in the United States Army in 2002 and attained the rank of sergeant.  He served as a member of the military police with tours of duty in Iraq, Afghanistan and Guantanamo Bay, Cuba, with additional service with the United Nations Security Forces.  He was a member of the United States Army Rugby team. Rob attended the West Virginia State Police academy and earned the "Officer of the Cycle" award. He returned home to serve with the Mason County Sheriff's Department and the Point Pleasant Police Department.  He taught the class of Peace Office Training at Buckeye Hills Career Center. He was a member of the American Legion, VFW and Knights of Columbus. Rob loved sports and enjoyed coaching biddy league football teams, fishing, hunting, music and playing guitar. He will be deeply missed by all.  May you go rest high on that mountain. Visitation will be from 10:00 a.m. until 1:00 p.m. Saturday, August 1, 2020, at Wilcoxen Funeral Home in Point Pleasant. A private funeral service will follow visitation, with Pastor Jordan Decker and Pastor Joseph Godwin officiating.  Burial will be in the Arlington National Cemetery in Arlington, VA.  Social distancing will be observed and face masks are required. In lieu of flowers, for those considering an expression of sympathy, donations may be made to the funeral home to help defray funeral expenses: Wilcoxen Funeral Home, 2226 Jackson Avenue, Point Pleasant, WV 25550. Condolences may be expressed to the family and memories may be shared by visiting www.wilcoxenfuneralhome.com.

The family of Robert Anderson Wilson created this Life Tributes page to make it easy to share your memories.

Send flowers to the Wilson family.